Below is a market update and rationale for recent investment changes. We sold investments in international stocks.

This year certainly has been a change from 2017. Last year, all markets were orderly and calm while 2018 has been nothing short of manic. The beginning of this year started off with a bang as stocks continued to rise around the world; however that was quickly halted as values dropped precipitously in February. Since then certain assets have recovered while others have continued to lag. Simply put, the United States continues to grow and deliver positive results while the rest of the world is once again falling behind. We expected markets to recover after the drop in February, but we did not think that the US would be standing alone as Europe, China, and other major international markets are again struggling.

US companies continue to grow faster and are more profitable 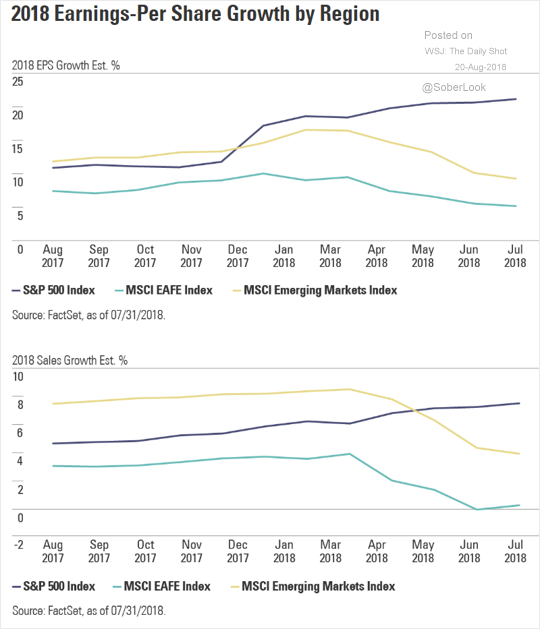 The most difficult part of our job is to decide what assets to include in client’s portfolios and how to weight each asset. It’s not only what we choose but also how much that drives performance. The decisions we make are multifaceted and based on ever-changing information. Similar to baking a cake, the ingredients need to be correct and work together to reach the desired outcome.

One of the core tenets of investment management is portfolio diversification. Owning numerous different assets together such as US stocks, international stocks, US bonds, international bonds, real estate, commodities, etc… is the way portfolios should be constructed. Well, what if certain asset classes have poor performance for long periods of time or do not have bright outlooks. Should we continue to place these assets in our client’s portfolios because that’s what everyone else does? We view this as a fundamental question to success. Things work until they stop working. We are always thinking What If?

So far this year, a diversified portfolio is struggling to generate positive performance as US stocks are up. This is because international and emerging markets assets are having a rough time with negative returns. Luckily, we have had relatively small allocations of international compared to the US assets. Even this small allocation has hurt performance. All advisors and investment managers are struggling with this reality. The fact is a standard diversified portfolio is not working like it should. We believe this will continue to be the case for a while as we have researched and analyzed this issue over the last couple months. Our determination is that holding international assets will more than likely continue to be a drag on performance as the US economy, US stocks, and the US dollar continues to be strong relative to other assets. At the least, they are not worth the risk/uncertainty relative to the reward.

US stocks have outperformed the major overseas stock indexes priced in local currencies so far this year. They’ve done even better when foreign indexes are priced in local currencies because the dollar has soared in response to Trump’s escalating trade war. Meanwhile, the 10-year US Treasury bond yield has remained below 3.00% since May 24. All this suggests that the greenback and US financial assets are viewed as the winners in a trade war.

However, Stay Home isn’t all about a risk-off approach to overseas economies. In fact, I believe that the outperformance of Stay Home so far this year also owes a lot to Trump’s stimulative tax cuts at the end of last year. The preceding statement doesn’t seem to apply to the trade-weighted dollar, which jumped 7.4% since the year’s low on February 1. That coincides with the implementation of Trump’s America First trade campaign.

I have often observed that the dollar tends to be strong (or weak) when the rest of the world is looking relatively weak (strong).

Of course, some of the relative weakness in the rest of the world reflects the relative strength provided the US economy by Trump’s tax cuts. In other words, the dollar’s strength isn’t all about the trade war. Fed officials continue to say that while the trade war may be a threat to US economic growth, they believe the economy will remain strong enough to justify further hikes in the federal funds rate from 1.75%-2.00% currently to possibly 2.75%-3.00% next year. Meanwhile, both the ECB and BOJ show no signs of normalizing their official interest rates, which remain abnormally low just below zero.

The main reason why Stay Home has been outperforming Go Global since the start of the bull market is that the forward earnings (i.e., the time-weighted average of consensus estimates for this year and next year) of the US MSCI stock price index has outpaced the forward earnings of the All Country World ex-US MSCI.” – Ed Yardeni PhD

In summation, we remain positive about US stocks and the economy for the near future. Major corporations continue to make record profits, interest rates are rising, economic indicators remain strong, and everyone wants to own US assets shown by evidence of the strong dollar and continued inflows of capital into the US. Our goal is always safety first and to avoid areas that could generate large losses. We do not know if international assets will experience steep declines, but at this point it’s better not to find out. If we can accomplish this the returns will take care of themselves over time.

One other positive to note is that interest rates are on the rise which means  we will be seeing higher interest payments from the bonds we own. This is also unique to the US at this time.

This site is for informational purposes only. Sklar Capital Advisors does not intend to provide investment advice through this site. This web site is in no way a solicitation or offer to sell investment advisory services or investment products and does not constitute legal or tax advice. Copies of the Firm's SEC Form ADV (Part II) and Privacy Policy are available at any time upon request.

Sklar Capital Advisors is an independent Registered Investment Advisor (RIA). We may only transact business or render personal investment advice in states where we are registered, file noticed or otherwise excluded or exempted from registration requirements. The purpose of this website is for information purposes only.